The Retaliators (2021) by Samuel Gonzalez Jr. and Bridget Smith 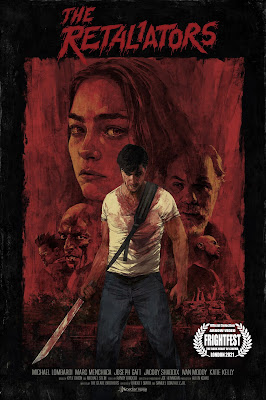 Director: Samuel Gonzalez Jr. and Bridget Smith
Year: 2021
Country: USA
Alternate Titles: N/A
Genre: Slasher
Plot:
Following the death of his daughter, a grief-stricken priest sets out to seek revenge for the person responsible, eventually finding him in the form of an underground criminal kingpin being sought by a multitude of organizations for his work and must dig deeper into his own resolve to escape the situation.
Review:

There was quite a lot to like with this one. Among the better features found here is the incredibly enjoyable setup that provides quite a fun setup to the later insanity featured here. The initial setup with the easy-going lifestyle of the priest trying not to get into confrontation or violence and then wretched with grief when his daughter is killed and eventually learning to stand up for himself works rather nicely, while the secondary setup of the need to catch up with the drug-deal gone wrong featuring the criminals scouring their own underworld trying to discover who the psychopath is and what he’s done with the money. This gives the film quite a unique setup that brings some rather interesting points along the way.
As well, the film manages quite a lot to like with the brutal and over-the-top confrontations with the killers coming into play. With the strong opening about the girls being stranded in the van and then finding the attempted saviors getting dispatched gruesomely before the graphic final scene, this one manages quite a lot to like almost immediately in a fast, frenetic sequence. The car chase and resulting accident that sets this one in motion are quite thrilling, and the relentless attacks that come about in the finale where the freed prisoners are let loose bringing upon a ton of frantic, furious sequences together as they attack the group in the underground dungeon and eventually make their way out into the woods which features all sorts of impressive effects-work on the graphic kills throughout here, giving this some likable features.

There are some flaws to be had with this one. The main problem is that so much of the film’s first half is so generally unappealing as a horror film that it’s easy to think this one doesn’t even fall into the genre. The opening attack is very misleading to the later scenes as the main setup that gets focused on the search for the figures in the criminal underworld that revolve around the killer that kills his daughter than it is about the deaths being dished out. This plays far more like a crime thriller than a genre effort with the way the scenes play out as the drug deal gone wrong involving the brutal murder of the courier which is not that interesting or features anything remotely close to what’s going on later on in the film so it just isn’t that good to get started.
That early setup highlights the films’ other issue in that there’s such a pronounced and obvious stylistic change between the first and second half that is awkward and clumsily put together. The sluggish pacing from the non-genre first half gives way to a furious, fast-paced second half that’s quite different not just in style but also in presentation. There’s so little about what’s going on here that feels cohesive and connected to what’s come before it as the turn from crime thriller to horror is not that well-defined and comes out of nowhere with how it’s played off. The shift in tone is drastic much like the content of the action featured here which all combine together to knock this back a bit.

Overview: ***.5/5
Quite enjoyable when it works within the confines of a brutal, bloody genre effort, the fact that this one comes off quite slowly to get that point and some clumsy exposition to tie it all together do manage to bring the film down slightly. Those who are more concerned about the positives or intrigued by this one due to its approach might have a fun time here but those turned off by the other issues should heed caution.
2021 Bridget Smith Retaliators Samuel Gonzalez Jr. Slasher