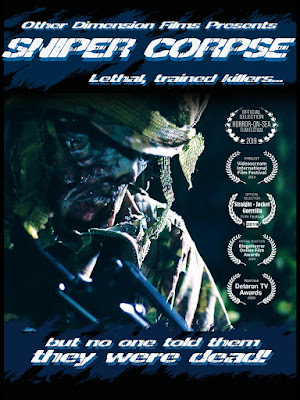 Director: Keith R. Robinson
Year: 2020
Country: United Kingdom
Alternate Titles: N/A
Genre: Zombie
Plot:
Trying to find her missing soldier husband, a woman heads to a remote section of the woods to check on reports that her husband is involved in a secret military project reviving dead soldiers into stoppable, unkillable weapons for the military and tries to stop their experiments from continuing.
Review: 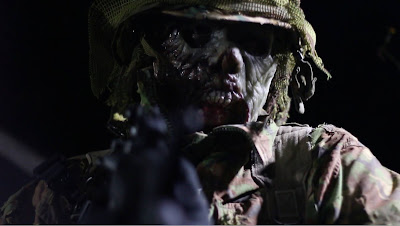 This was quite a fun and enjoyable Action/Horror hybrid. Among the more enjoyable elements here is the engaging storyline that generates a lot of fun positives. The whole concept of utilizing the bodies of dead soldiers into a zombie-like being capable of being used in various military black-ops movements is a fine touch, much like the whole thing about enabling the creatures to remember and focus on aspects of their former lives. That this is all discovered through a generally intriguing mystery in the first half about the search for the missing soldiers and the legalities of what's going on is all quite fun and intriguing which is all the better for the film which keeps it going during its build-up.
On top of this fun story, it manages to feature quite a lot of action. The opening sequence that brings about their impressive performances by taking out the drug dealers with their training and firepower is a nice introduction managing to feature the action of the shootouts while still being atmospheric and chilling. Her interruption of the war games practice in the woods offers up more fun with the eeriness of the situation and confronting the reanimated soldier which is a nice series of shootouts to stay safe while also furthering the plotline nicely. The finale, featuring several more fun gun-battles as they attempt to bring down the experiment by taking out the main villains at the compound and turning to the other zombie-like soldiers coming to stop them which provides some quite fun gore in the kills. These manage to hold the film up overall.
This one did have a couple of flaws on display. The main issue here is the seemingly nonsensical means by which they uncover how far gone they've become. The seemingly random nature of her simply showing the zombie soldier holding a gun to her face a picture that she says is him and for him to ignore orders from the military to follow her along makes no sense. The way it happens with no build-up, reasoning, or motivation at the time to do so and to then react in such a lackadaisical manner to the information is all too unbelievable to be realistic. The other factor to lower this one here is the few indications of the low-budget on display, which isn't detrimental but becomes obvious here with the masks worn by the zombies to the CGI used to denote the muzzle-flashes for the shooting funs which adds some cheesiness to the film that doesn't need to be there. Otherwise, this one doesn't have much else really wrong here. 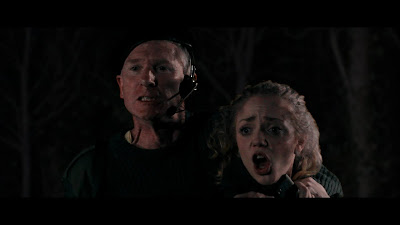 Overview: ***.5/5
With a great bit of action supplanted by a fine storyline that doesn't have much really to dislike, this one comes off nicely with a lot to like about it. Give it a look if you're a fan of these indie genre efforts or enjoy the style of Action/Horror hybrids attempted here while most others should heed caution with this one.
If this sounds intriguing, copies are available for purchase at the following:
https://otherdimensionfilms.com/store/
2020 Keith R. Robinson Sniper Corpse United Kingdom Zombie