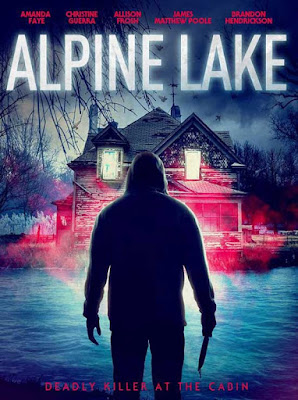 Director: Wayne Johnson
Year: 2021
Country: USA
Alternate Titles: N/A
Genre: Slasher
Plot:
Heading out to a cabin in the woods, a group of friends arrives trying to relax for a weekend after the stress of school, and as they stay there over the weekend come to find the area haunted by a vicious killer targeting them one-by-one and must find a way to escape their wrath.
Review:

While not great, this one wasn’t as bad as it could’ve been. The fact that this comes across as cliche and overly familiar as it is works to give this a generally enjoyable feel when it hits the familiarity aspects of the storyline. Giving the expected wait until the killer arrives, the amount of time we get here getting to know the group and their business together provides this with the kind of proper build-up to where the expected notes of the killer hanging out around the outskirts of the area picking off stragglers or approaching the cabin it becomes a lot more fun.
That gives the film some enjoyable scenes bringing the killer into the groups’ focus. Once the lone victim arrives near-death and the group decides to leave, the revelation that they’re trapped and forced to defend themselves leads to a nonstop series of confrontations where they are continually forced to run through the woods trying to get away. Thwarted and picked off one-by-one n the woods with a highly surprising death order, this all comes off incredibly well for what type of film this is as it’s quite suspenseful and energetic, giving this some likable elements that hold it up for the most part.

There are some big issues found here. The film’s main problem is the generally unimpressive killer that we’re supposed to be scared of here. The lack of an imposing physique or murder weapon makes for an incredibly laughable force when shown on-screen, and it’s not helped at all by the scenes showing them wearing a hoodie wandering around lamely jumping someone from behind. Given no real backstory about their hunting the area or connection to the town to help tie those elements together, the killer here is a wholesale joke that we’re supposed to fear.
The other issue here is the wholly obvious one in the limited budget giving itself away nearly every chance it can. The on-location guerilla-style approach involving the lack of locations, constant continuity issues and real-time lighting which makes it nearly impossible to see what’s happening at night, and given that a lot of this one takes place at that time really holds it back. Given that the majority of the kills are off-screen or cut away before anything happens is quite apparent and holds it back even further, making for the films’ main problems overall.

Overview: */5
A low-budget mess that manages to be watchable enough due to its origins and some energy in its final half, although the rest of the one comes undone due to a joke of a killer and the budgetary limitations. Really only go for this one if you’re a fan of these indie slashers while most others here would find the flaws far more overwhelming and should heed extreme caution if not outright avoid.
2021 Alpine Lake Slasher Wayne Johnson