Director: Marc Fehse
Year: 2020
Country: Germany
Alternate Titles: N/A
Genre: Sharks
Plot:
After a series of accidents in the world's skies, a covert government agency discovers a long-rumored Nazi experiment to equip sharks with the capability to fly has been accidentally awakened and set out to accomplish their goals of world domination forcing them to stop their diabolical plans.
Review: 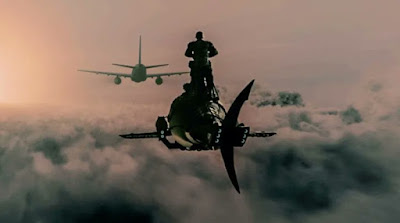 This was an exceptionally fun and over-the-top effort. Among its better features is the impressive action that takes full advantage of the goofy scenario. The opening plane attack is glorious, featuring the sharks approaching in a swarm to take out the plane's structure in order for the soldiers to enter and slaughter the passengers in a gloriously graphic fashion. The zombie-like soldiers are given as much time to share the glory as the sharks, creating the perfect introduction to what's going on by giving this a spectacle-filled sequence full of cheesy, over-the-top action to give this a great time.
This is carried out by the action movie tone and layout that follows. Mixing hand-to-hand and even full-on weaponry by the Nazi Zombies in addition to the use of the flying sharks, the aborted raid on the hideout where the operative is attacked by the creatures and the rescue mission is barely able to get away continues the high-energy action. The shorter scenes featuring their rampage across the world are just as much fun and the expected showdown in the sky where they battle the massive swarm attacking the second plane in a huge fantasy-riddled sequence that has plenty of cheese, stunt-work and spectacle to end this on a thrilling note. 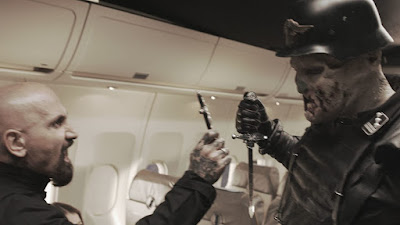 In addition, the fun storyline here manages to mix together plenty of fun elements together for a cheesy time. The general ploy of finding the thought-lost Nazi experiment buried in the ice and being reanimated to carry out the plans of the Third Reich to take over the skies is a fine ploy as it is, yet this one goes even further to add in the experimental serum to keep his employers from being turned into the creatures is a fine addition to things. Mixed together with the secret weapon of the zombie soldiers overcoming the shark engineering, the story here is cheesy fun which is all added together with the fantastic practical gore to be highly enjoyable overall.
There are a few issues here. The biggest problem with this one is the wholly disjointed manner this builds its storyline as the sense of what's going on can be quite confusing. Going back-and-forth constantly to the various flashbacks that detail everything in the timeline that was set up here tends to cause a big tonal shift as well as a sort of jarring whiplash to feature these scenes. That does cause another side-effect of over-explaining the theme to the point of being so overdone it feels like it could've been done in simpler manners, which along with the cheesiness of the film could be the issues holding it back. 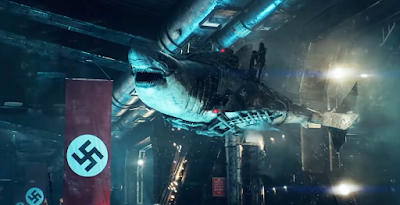 Overview: ****.5/5
An over-the-top action fest with plenty of enjoyable stunt-work, spectacle and gratuitous gore, this is exactly the kind of wholly entertaining and cheesy genre effort it should be. Give this a look if you're a fan of the style, intrigued by this genre or just in the mood for a cheesy, mindless killer shark film while those who don't enjoy that should heed extreme caution.
2020 Creature Feature Germany Marc Fehse Sharks Sky Sharks