Shark Encounters of the Third Kind (2020) by Mark Polonia 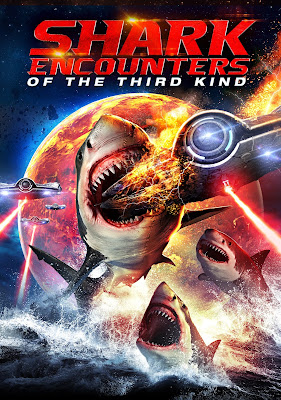 Director: Mark Polonia
Year: 2020
Country: USA
Alternate Titles: N/A
Genre: Sharks
Plot:
Upon arriving on Earth, a group of aliens decides to mind-meld themselves with a swarm of sharks in a small-town community and use them as guards while starting their full-scale invasion, eventually alerting the locals in the town who are already convinced of alien activity and force them to fend off the creatures.
Review: 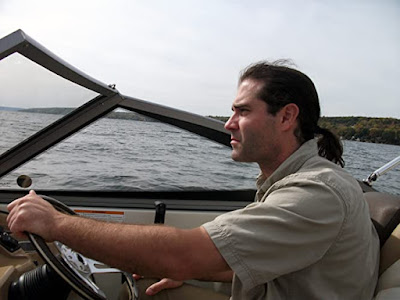 On the whole, this effort is pretty cheesy and enjoyable with a lot to like. Among its better features is the wholly impressive manner this simply dives into the cheesy nature of what’s going on here. The opening shots of the crazy alien ship coming to Earth, attacking the satellites in orbit and then melding psychically with the sharks after scanning the oceans around them gives a pretty decent indication of where this one is heading from the start as the corny scenario and campy effects bring about a real charm. As well, the lovably plush puppet for the shark in the middle of the attack is a perfect capper to the sequence as it looks completely different from the CGI creature used to show it swimming around in the depths nearby but also continues its sense of goofiness with the rest of the attacks and special effects used throughout the film.
This one also manages to get quite a lot to like with those main shark attacks. From the opening shot of the divers being attacked by the creatures and chomped on leaving only bloodied fragments behind, the decision to focus on the cheesy side of the genre is apparent with the attacks on the swimmer in the ocean who gets out only to be chased back in by the aliens and devoured by the sharks, a lengthy sequence in the water staking the patrol boat looking for the second diving crew or the final attack on the treasure hunters where the various sharks remaining are used for a nice series of jump attacks on the surface picking people off the boat in more scenes featuring the puppet coming into play which gives off quite a nice cheesy atmosphere. All coupled with the finale involving the resolution to the divers looking for the lost gold that generates some cheesy action as well as the series of the sharks going around attacking people and aliens alike in gloriously cheesy antics, there’s a lot to like here.
That said, there are a few flaws to be had. The main issue is a decided lack of explanation for anything happening here, with the big issue being the early scenes of the locals being involved in their exploits with the aliens. Most of them don’t connect to any kind of storyline presented here as the invasion conspiracies are quite goofy with the abduction group being a coincidence much like the secondary plot involving the treasure hunter looking for the missing gold in the area. These would all be worthwhile if they moved the plot along instead of just eating up running time in the film as that’s the main culprit for the objection without a lot of shark or abduction activity in order to get these done with. This also means the films’ ending comes off as incredibly rushed with all the information about the purpose of their visit and abductions coming in the finale just before it ends as there’s no build-up to anything and uncovering of what’s going on, rather just announcing everything and leaving which is a bit of a disappointment. Featuring the cheesy and outright fake-looking effects that can be a turn-off as well, these issues are what hold this one down. 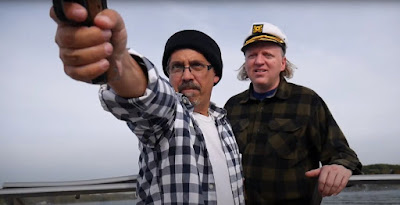 Overview: **.5/5
Another in a long line of inherently fun and goofy cheesy creature features from this studio, this is precisely the kind of film this looks to be and doesn’t offer up any kind of surprises should you know what you’re getting into. Give this a look if you’re a fan of the creative crew or this brand of low-budget cheesy creature features, while most others will not be swayed by this one.
2020 Creature Feature Mark Polonia Shark Encounters Sharks