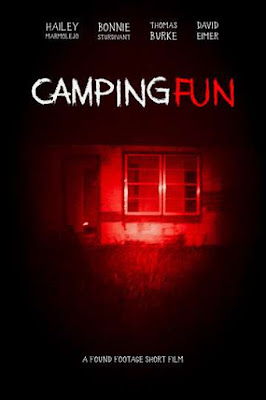 Heading out on a road trip, a group of friends in rural Texas investigating a strange compound get more than they bargained for when they encounter something far more dangerous than expected.
Overall, this was a solid and highly enjoyable short. The quick intro getting familiar with everyone and what they’re doing at the house and what they’re doing at the house is a fine way to get this going when mixed alongside the backstory of the area’s history. With the fun found-footage style of them going through the house and getting everything ready for the creepiness that comes about in the finale, this offers up a rather creepy tale with a lot to like about it.
It does have one issue which is quite prominently featured in most found-footage efforts in that there’s plenty of opportunities wasted here because the camera is out-of-focus or aimed at the wrong thing during the scene making it hard to figure out what’s going on. Since this arises during the scenes with the twist and what’s going on in the house it’s somewhat unfortunate in bringing the scares to life as for what happened but the rest of this one doesn’t have much else wrong.
Camping Fun David Eimer Found-Footage Shorts Thomas Burke