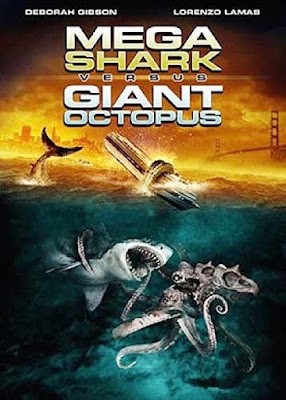 Plot:
After being released from the Arctic, a biologist joins with a military operation trying to track down and destroy an escaped Megalodon and a giant octopus who've rejoined an ancient feud that's destroying the world, leading to a military battle to get them together to finish the feud once and for all. 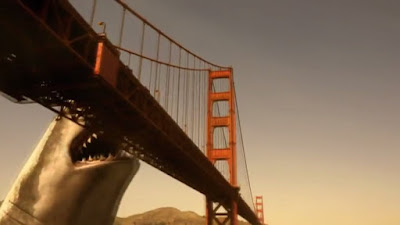 While this one was a slight disappointment, there's still a lot of enjoyable elements to this one. What really works in this one is the film's briefer attacks here, as there's plenty of exciting sequences that are short and immensely cheesy while managing to include both creatures getting ample screen-time. The octopus gets a great attack on an oil rig ripping it to pieces and a fine ambush on a fighter jet, while the shark gets the highlight as it takes out a jet up in the sky and a spectacular battle in San Francisco Bay where the military battle leads nicely into the destruction of the Golden Gate Bridge. The shark manages to hold on with several other great scenes here with the submarine chase out in the high seas which is incredibly thrilling due to the high-speed chase nature of the scenes and the close encounters of the attacks against the subs, and a huge lead-in to the sea-caverns escape gives this a lot to like overall.

Even the titular battles comes off great, as there are a few opening rounds before getting to an extended, drawn-out battle that's incredibly fun and exciting as the battle switches up the aggressor and who's in charge of the fight in a spectacularly cheesy scene that nice nicely follows the type of cheese featured in the rest of the film. As well as the cheesy fun, there's more fun in the opening release of the creatures amid the traveling whale pod that makes this one come off really well and gives it a lot of enjoyable times here. These here are enough to make this one enjoyable even though there are a few problems in here. 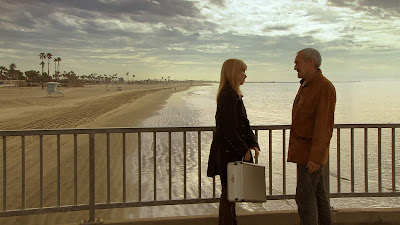 The biggest issues in this one is the absolutely ridiculous CGI here, which is a lot more prevalent here than in most others out there. There's the usual feature of keeping the creatures looking obvious and unrealistic by being completely low-tech versions that rarely interact with their surroundings all too well, but another issue strikes up here with the film prolonging the action by either repeating shots from elsewhere over and over again or keeping in a series of shots that don't really mesh together all too well. Scenes like the destroyer battle out in the open sea or their final battle together in are both highly appropriate forms of this one as they're both CGI heavy that are just woefully executed and aren't really good enough to be cheesy with the repetition of these flaws through along the scenes.

The other big flaw here is the really troubling pace here that keeps the action stifled to a few isolated segments here as the film takes on several different plot lines that keep the shark action in favor of these lame storylines, from the contrived romance and the scenes of the group talking tough with the military that eats up so much time that it keeps the creature action out of this one. These here are the film's real flaws. 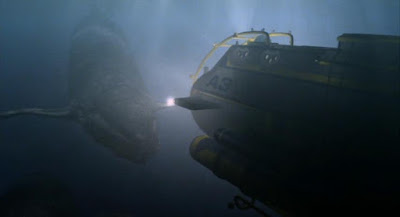 Overview: ***/5
While it doesn't reach the insane heights the later entries in the series get to, this is still so much fun to be watched on its own that it manages plenty of good times as it's own film. This is highly recommended to lovers of schlock cinema or fans of over-the-top killer shark movies, while those that aren't into this style should avoid altogether