Plot:
Taking a job at a remote villa, a woman working as an assistant to an eccentric painter only to be continually troubled by the strange dream of a naked man on horseback attempting to rape her, yet when he materializes and begins a relationship with both of them 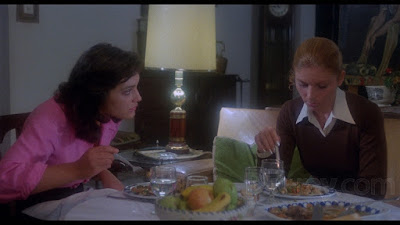 For the most part, this was a fine if somewhat lacking psycho-thriller. One of the few bright spots featured here is the rather enjoyable amount of time it spends chronicling the effects of the dreams on her psyche. The idea of the nude male on horseback charging at her and attempting to rape her provides a solid backbone for a woman in her condition to become unglued in such a situation where she's bringing the baggage of her past relationship into the house with a woman already suffering from her own sexual hang-ups. That this female-centric effort is taken to the inclusion of a male figure intruding on this setup has plenty of fine sexually-charged subtext throughout that ranges from women being uncomfortable with their sexual desires unless featuring a male to a pointed look at her gypsy origins for how she was raised. That the accompanying sexually-charged nature of this material makes for a wholly erotic tale here packing this with fine nudity from both male and female performers in a solid sleazy showcase.

On top of that, there's plenty of fine artistic merits on display here to make for a much more symbolical showing than expected. The dream sequences, atmospherically done with filtered images of the nude rider charging at her in slow-motion splashing water around in a haze of sparkling light bouncing off the droplets, creates a wholly enjoyable artistic touch that makes this look far classier than the sleazy action depicts. As well, other surrealistic touches include scenes of lovers writhing in glistening abandon during sex or a dream sequence of one character kneeling inside the rear section of a life-size horse cut-out. Likewise, with the soft-focus and sensuous musical score during the numerous sexual escapades languishing between the erotic and the arthouse that was incredibly typical of the sexploitation industry in Europe at the time, there's never a really sleazy or dirty feel to the material at play here as the vast majority of the time here is spent on making the film comes off like a sense of normalcy that just so happens to feature erotically-charged material. 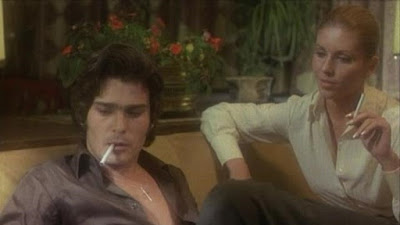 The cast here is perfectly suited for this type of role. Patricia Granada as the main painter Lorna isn't really a model of the European artist, cold and mechanical rather than the youthful bohemian that's usually depicted here and it makes us gravitate to her because of that. With her initially icy nature and burgeoning sensuality brimming beneath the surface, she warms up considerably and becomes quite a fun figure the more we stay with her. Lidia Zuazo as Triana the gypsy is a rather complex and intriguing character with the illiteracy making her seem less civilized than the worldly Lorna. Still featuring her gypsy roots so her fiery attitude and free spirit keep her in our good graces even though she spends half the movie acting completely irrational or flip-flopping between welcoming he advances or being appalled by them. Rafael Machado as the enigmatic Chico is a suitable male protagonist, fitting the role of lothario well with his wild good lucks and willingness to embrace the constant nudity his role requires. He supports both women well and seems natural they'd fall for him, making this a well-rounded feature overall.

Still, there are some flaws to be had here. The main issue on display is a wholly confusing storyline that makes absolutely no sense at all, ranging from the need to harp on her gypsy background that doesn't really have much play in the finished product anyway to the completely clueless manner we are towards what her dreams really were. Since she never utters the fact that he was the one she saw in her dreams or what he did to her in them, the fact that he comes to life and a love triangle develops instead of revulsion or hesitation to be around him results in the entire last act of the film unfolding merely because it has to. It's all left completely in the air as for what that's supposed to come from or what the purpose is when everything is thrown into the air and left unexplained in a state of confusion. That also ties into the film's other problem in that these questions highlight how bland this is for the most part, with nothing exciting being filmed with plenty of artistic touches that just end up making this one incredibly boring at points. These here are what hold this one back. 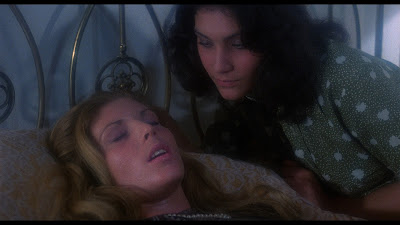 Overview: ****/5
With some fine work on display here as this mixes together some arthouse tendencies with the exploitation means, it works for the most part although it has some minor flaws present in its bland tempo and overall confusion. Give this a shot if you're into those artistic sexploitation offerings from Europe in the 70s or curious about this one, while those that don't follow those kinds of films should heed caution.