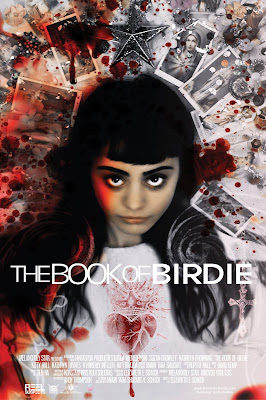 Plot:
Sent off to a secluded nunnery, a troubled young woman prone to hysterical hallucinations begins to dive even deeper into her own sheltered world the longer she stays, and as her grip on reality wanes she begins to cause the other nuns worry that she's developing into an unwarranted religious icon. 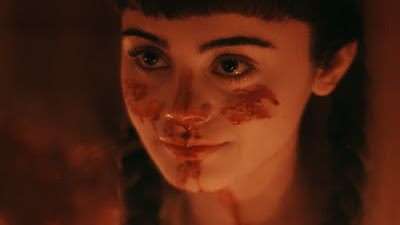 For the most part, this was a wholly effective dark fantasy/drama. The fact that it's built so heavily on the religious symbolism, most prominently the heavy blood-flow featured throughout not only from her own body but also the remnants of whatever else is around at the convent plays such an impactful role here. The constant tie-ins to the stigmatta here provide this with plenty of commentary about the true nature of her purpose there at the convent which is especially prominent the longer she stays at the convent where she begins dabbing blood on herself in order to resemble the crucified Jesus even more. The bloodsoaked decorations and hallucinations she has further this even more and bring about one of it's most enjoyable aspects.

Likewise, the different aspects with the hallucinations she has throughout the film. While some might look at the idea of her ghostly visits with the dead nuns throughout the convent grounds, especially the one hung-up in the tree or the mangled body at the bottom of the staircase, the fact that they're never played for scares as they tend to not only interact with her in their meetings but also provide a sense of how her stay is impacted by the different spirits at the location. It's played out in a fine, distinguished manner which offers a far more poetic, almost lyrical approach to the material which is far different in intent that offering these scenes out as shocks or jump-scares. 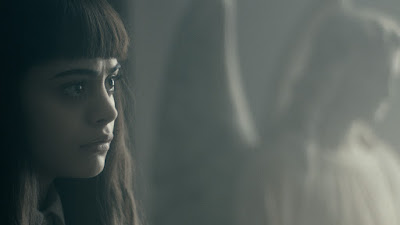 Its' also helped out with some stellar acting prowess. Newcomer Ilirida Memedovski is absolutely exquisite as the lead Birdie, a perfect mix of Gothic innocence and wide-eyed wonder. With a vast majority of the film focused on her story, the fact that she keeps us firmly on her side as she delves into madness through her behavior is quite impressive, with her focus away from the religious antics that's to be expected here offering up quite an intriguing character. The way she even interacts with the others around her at the convent, from the strict Mother Superior played by Suzan Crowley, the rest of the nuns at the convent or even the groundskeeper's lesbian daughter Julia, played by Kitty Hall which provide this one with plenty of likable elements to raise it up over it's few minor issues.

The main problem with the film is the fact that it's not in the slightest bit comprehensible about what's going on. The film offers up no answer for anything that goes on within here, about why she's dropped off at the convent in the first place to whether the religious intonations are caused by the ghosts inhabiting the locale or are part of her doing all along or even the cause of her rebirth into the spiritual deity they claim. Each of these are important answers that are glossed over in favor of the glossy visuals throughout here which are distracting enough that they might not even be noticed by many. Likewise, it's more fantasy-oriented approach might put some off looking for overt horror aesthetics but overall, it's not as detrimental as expected compared to the other issues at hand. 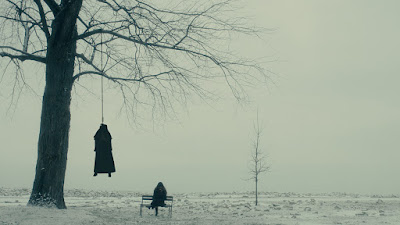 Overview: ****/5
With plenty of stand-out fantasy elements packed throughout here which allows for a strong lyrical bent, this was quite an impactful effort that has very little going against it. Give this one a chance if you're fond of these delirious fantasy-driven efforts or are curious about it's symbolistic intent, while those looking for an out-and-out horror feature should leave this one alone. 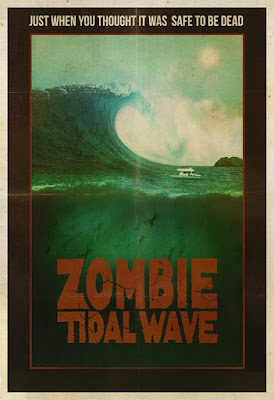 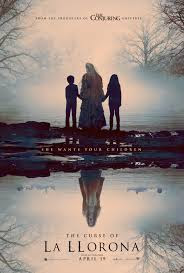 The Curse of La La Llorona (2019) by Michael Chaves

Plot:
Working for a truancy case, a single mother finds the situation has brought her and her children into the realm of influence of a deadly Mexican folktale known as the La Llorona, a figure that targets children and must rely on a native spirit-healer to protect her children from the spirit.

This one was far better than expected. One of the films’ better features here is the overall impressive and strong technical features that make the film very sleek and professional-looking. The atmosphere of the shots here, from the afflicted kids wandering through the hallways in the asylum where the flickering lights hide the spirit, the confrontation at the crime scene of the children where her kids find the ghostly figure waiting for them or the spirit arriving at her house and toying with her and her kids throughout the night manage to be appropriately chilling and full of high-budget stud…