The Shallows (2016) by Jaume Collet-Serra 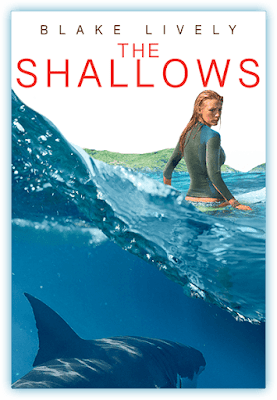 Plot:
Taking a trip to a secluded beach, a woman intending to surf in the area where her and her mother surfed years earlier is attacked by a shark prowling the area and tries to survive the encounter long enough to get help as her limited supplies and slowly slipping conscious derail her chances. 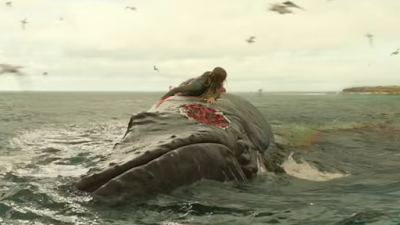 This one was quite the enjoyable and somewhat thrilling effort. Most of what works here with this one is the fact that it takes quite a bit of suspense from the situation that comes naturally in such a situation. This type of setup is one of the more realistic and believable type of situations for a shark attack where it occurs in a secluded area involving a lone shark in an area targeting other factors around the environment and only just turning the attention to the surfer only by proxy. The behavior of the creature, seemingly more interested in the free meal around it than spending it dealing with her and only turning it's attention to her once she gets into the water because of the cuts she has, comes off as incredibly realistic and seemingly in tune with how such creatures behave in real life.

This in turns gives the suspense of the few attack scenes quite a bit of power as they carry themselves out. The initial attack out on the middle of her surf into shore is quite nice due to the obvious shots of it stalking her from the beginning and it strikes at a truly unexpected time leaving this with quite a nice surprise. The series of attacks in the water as she tries to survive are incredibly thrilling, using the shrinking location and the continuous onslaught of the creatures' appearances to stellar effect as her worsening physical condition makes for a fantastic counter to the rest of the situation. The finale on the buoy is stellar as well, giving this a nice action quotient and a rousing finale that's perfect for this kind of effort, and alongside the great prop shark that's involved here really holds this one up over it's minor flaws.

About the only real factor involved in knocking this one down is the utterly severe amount of injuries inflicted here that don't really make any kind of sense as to why she's still able to fight back. It's quite obvious that the initial wound is quite striking and severe, which has the brutal bite on her leg as well as the bumping against the bottom which clearly dislocates her shoulder but to then feature the bruising across the body from the rock sanctuary, the multitude of cuts and scrapes trying to get to safety out of the water or the series of crashes and cuts while fighting the shark off at the buoy that cause her plenty of additional bloodless alongside what she's already gone through. This just doesn't look logical at all and is the real negative force holding this one back which isn't really all that detrimental at all. 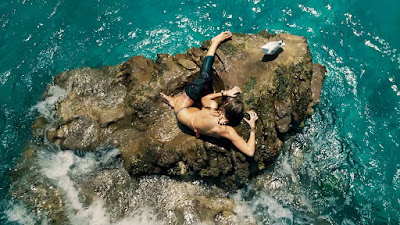 Overview: **** 1/2/5
While it comes with a few minor flaws, overall this has more than enough to dive into that it becomes incredibly enjoyable on most accounts. Give this one a watch if you're at all interested in killer shark films or mainstream creature features in general, while those that are as into this serious side of the genre should heed mild caution.