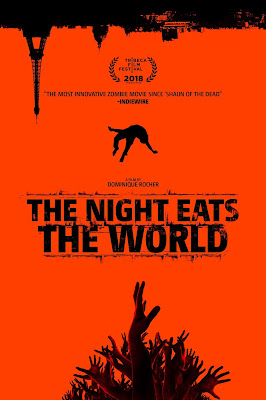 Plot:
Waking up from a raging party, a lone man finds him in the empty apartment complex with everyone missing and a massive zombie outbreak overrunning the city forcing him to barricade himself inside the building to protect himself from the creatures while trying to remain safe and sane. 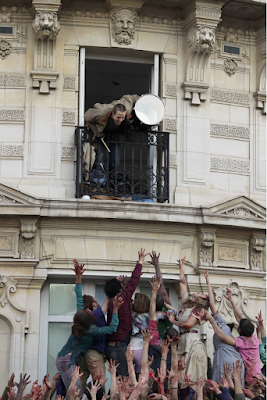 This was a decent enough if still flawed zombie effort. One of the few positives featured here is the fact that this one does incredibly well at featuring a creepy setup to the zombie outbreak. The idea of them crashing the party and then overtaking the city while the guy's sleeping through it all, meaning he wakes up to find it abandoned and empty with the last few remnants of survivors coming under attack by the zombies that he sees, from the scattered attacks of the people in the apartment across the street to the few zombies left in his building still left inside. This works to make the opening of this rather creepy and chilling as the suddenness of the situation makes for an appealing start to this one as it goes into the series of events featuring him wandering around the apartment cleaning up after the party. Showing the different tactics of him trying to clean up the apartments, going room by room and occasionally finding zombies still inside or simply doing what he can to remain sane in the situation with that detailing scenes of him staying in shape to maintaining locks and other protective barricades against the creatures. Staying with this feature for as long as it does makes for an intriguing survivalist story in the middle of the zombie outbreak as the fact that they're still present and still a menace with plenty of mention made to keep them in the picture in regards to always being around. In addition to the fine gore and zombie make-up, these here hold it up over the rather detrimental flaws. 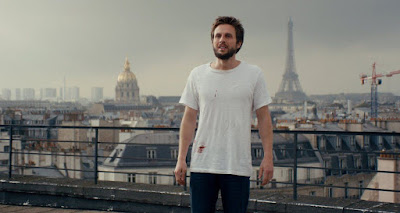 Among the main issues with the film is the fact that there's absolutely no way this should've been allowed to be a full feature-length effort as the story here is just not supportive of what's going on. The idea of him being alone in the middle of the zombie apocalypse seems fine enough as a start, especially with him being trapped in the building by the hordes outside who won't let him escape further into the city should he get free, yet way too much of this one seems like filler material designed to stretch this out beyond what would've been a fine anthology adaptation. The endless scenes of him running around carrying on the repairs of the house or trying to keep himself sane merely serve to highlight the lack of real zombie attacks within here, and then comes the utterly infuriating idea of playing drums within the house that only serve to bring attention to himself with the noise they make with the ferocity he's playing. Any musical instrument in itself is a horrible idea during that time, so him going along with this idea really serves to bring that length issue up since it has no other purpose being here is the goal is for him to avoid detection. The means of him not attempting escape plans or finding out a way to know more about what's going on are also rather curious, and the whole decision-making process he undergoes throughout here is highly suspect. With a weak finale that only serves to highlight that lack of zombie action within here, these manage to hold this one down somewhat. 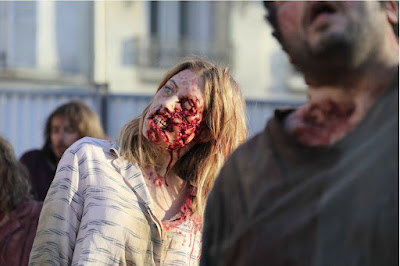 Overview: ** 1/2/5
While it does manage to accomplish some rather intriguing and enjoyable elements at times, for the most part this one really emerges with several big flaws that are somewhat detrimental. Give this a watch if you're into the new-wave of dramatic-filled horror features or are looking for something different in the crowded zombie genre, while those looking for more traditional action-packed genre fare should heed caution.


This ran as part of our coverage of the Fantasia Festival 2018 series of reviews.
2018 Dominique Rocher Fantasia 2018 France Night Eats the World Zombie