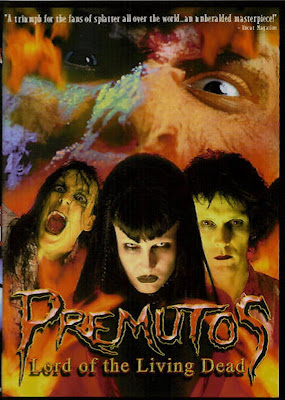 Plot:
Trying to live out his life, a young man is plagued by flashbacks of himself fighting the fallen God Premutos throughout history and gradually believes that he is the son of the being which brings about an apocalypse as the slain followers rise from the dead to attack the countryside. 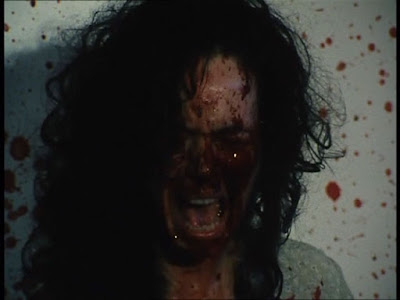 This is easily one of the goriest films ever made. One of the better features here is that there is really no way to describe the gore and bloodshed present in the film. Containing chainsaw eviscerations, being split in half, decapitations, slit throats, axes sliced into almost every body part and gunshots are just a part of what is used to inflict damage, and there is much more to this with both sides getting torn up. As there are so many deaths and mutilations on display it just becomes a showcase for the special effects. The good part is that most of them are quite impressive in their on-screen realization, which makes them appear as if it's happening in real life and therefore more relatable. The zombies here are just delicious-looking, full of European goodness with facial wounds and scars, body modification and damage done to them that are quite striking and memorable. This is the movie's greatest feat, as since it's all kept light-hearted so an incredibly gory movie is fun to watch.

Beyond the gore, there is a lot to like about this one which includes the action scenes. The flashbacks spread liberally throughout the film definitely get better and more intense as it goes along. The attack on the farmhouse is a great one, with plenty of action, gore and some great moments spread in it, and the WWII one sticks out as well. Of course, the final half hour of the film features some of the most impressive gore effects ever as a continuous line of action happens during that time that it's nearly suffocating. It is wall-to-wall to a degree rarely seen in such a film, and the fact that it's so long a sequence makes it all the better. While not laugh-out-loud funny, there are some pretty funny sequences here that do get a couple chuckles. A soccer sequence is the most likely, due to an outcome that could be seen coming from a mile away, but yet still appeals to men everywhere who love the lowest-common denominator gags and the dinner party sequence gets some good laughs. 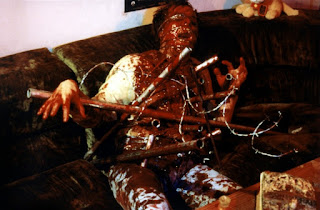 Despite the gore in here, this is still flawed. One of the main things is the pretty nonsensical plot. It's almost impossible to tell what's going on in the film, especially at the very beginning and the fact that it keeps going back and forth through times makes it all the more difficult. There really isn't any motive for Premutos' return, and no attempt is even made, which would've been a nice inclusion into the narrative. His threat is revealed numerous times, but nothing is said about why this particular time and place is the time for him to return. Even still, once the zombie resurrection has started they both disappear from the film with no explanation as to why. This is the greatest danger to the film and the only part holding it down.

There's not much to say about the acting here. The lead Matthias, played by director Ittenbach, is portrayed as quite the loser in life and doesn't have much luck with anything as he's constantly getting himself injured or infuriating his stepfather with his unmanly attributes. His past-life scenes are decent enough for their brevity, although the fact that he disappears once the dead have been resurrected is apparent that he knows he's not much of an actor. His stepfather Walter, played by Christopher Stacey, also stands out for being the hard-assed, discipline-minded hothead. He's quick to put his son down and wants him to stand up to life, but his well-meaning intentions get lost in the fray. While the rest of the cast doesn't stand out, they each have quite a distinct set of behavior to them, from the put-upon husband and the nagging socialite wife, the slutty sister and the random friend there for no reason. These make this one decent enough in that department but overall its still not Oscar-quality work. 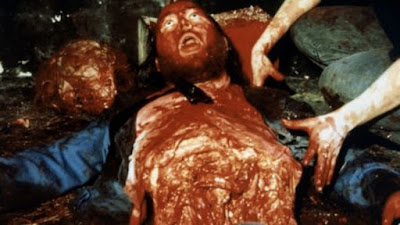 Overview: ****.5/5
I had long believed the Italians were the Kings of Splatter, but I'm more than willing to admit the Germans are right there with them. This is one of the classic films in the genre and will leave no gorehound in disappointment, making this an essential choice for fans of that genre of the German splatter scene. Don't think about it too hard, though, and you should be just fine.