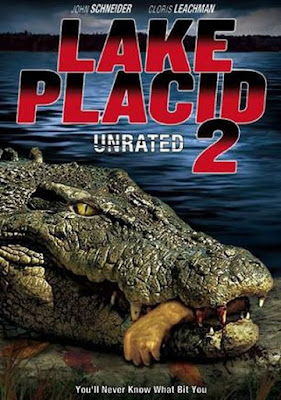 Plot:
Following a series of strange attacks, residents of a small Main lake find a giant crocodile living in the lake and are forced to deal with a dangerous hunter to stop the creature's rampage. 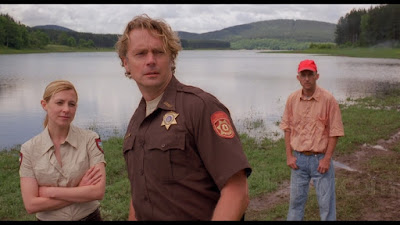 This here turned out to be quite an enjoyable creature feature. One of the better features here is that this one manages a lot of action scenes featuring the crocs that are put on-screen quite early in here which allows this one quite a frantic and incredible pace along here. These are quite exciting with the initial scenes of the group being attacked out on the water in the patrol boat, the attack on the friends camping by the lakeside, the failed trap on the beach where they attempt to tranquilize the creature to no avail and the encounter on the water when they manage to successfully trap the croc and it succumbs to their armaments which is a great scene by itself but all the more potent when added alongside the rest of these action scenes.

As well, the big finale in the woods works nicely as the staking near the nest features some nice suspense, the chases through the trees get plenty of nice action throughout here and the big brawls featured here gives it plenty of spectacle as well for a really thrilling and exciting finale. The shorter attack bits are also quite fun where it's relegated to brief ambushes that are based more on it popping up unexpectedly for a bite then disappearing again which also helps this one up the violence and gore here as there's some pretty brutal attacks here giving this one a lot to like. That one also manages to highlight its few flaws here as the film does tend to rely a lot on the shorter attacks for the majority of the scenes in the first half.

While none of these scenes are really all that bad there's a lack of deviation here which brings this one to a tight, cramped-up feeling when there's a few short action scenes along the way. The only other part about this one that does tend to hold it down is usually horrid CGI featured for the most part here. The crocs are rarely believable here with flat, pixilated bodies that don't match the surroundings, obviously change size and scale from scene-to-scene and in general just looks quite bad. As these elements become quite apparent throughout all these kinds of genre efforts and really shouldn't be that much of a surprise, there's still the idea of them appearing in the general sense which strikes as being flawed for how obvious they are against realistic animals. These here are what hold this one down. 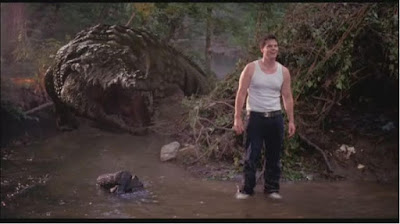 Overview: ***/5
An enjoyable and somewhat overlooked genre effort which really has some enjoyable elements that offers plenty of strong, stellar elements to go along with a few noticeable, rather detrimental flaws. This is certainly a watchable effort if you're willing to go along with these kinds of cheesy made-for-TV genre efforts, while those looking for substantial fare should steer clear of this one.