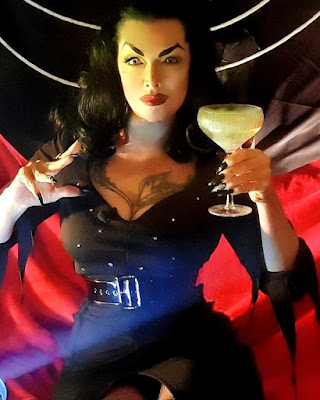 An accomplished burlesque performer and horror hostess, Domino Barbeau offers fans plenty of old-school flavor and love with her performances and webshow Barbeau's Batcave keeping the flame alive for the genre. Now, in honor of Women in Horror Month, I talk with her about her early interest in the genre, her work as a performer and her experiences as a hostess.
Me: Hello and thank you for taking the time to do this. First off, were you into genre films growing up? What films specifically got you into watching horror movies?
Domino Barbeau: It feels like forever since the first time I saw Vincent Price and Peter Lorre in The Black Cat segment of the Samual Z Arkoff movie “Tales of |Terror”. I was quite young and was allowed to stay up late one night. My parents loved vintage horror, the supernatural and unexplained mysteries. This all led to an early interest in the strange and unusual and a love for the horror genre in general. I soon became a big fan of the Universal Monsters, Hammer and Brit Horror, as well as pioneering television such as Rod Serling’s Twilight Zone and Night Gallery shows.
Do you remember the TV movie “Trilogy of Terror” with Karen Black? I loved that one. It lay in obscurity for years but it seems to be getting the recognition it deserves now, perhaps because of YouTube fan groups. The Zuni doll section scared the hell out of me. I just don't trust dolls anymore!
Me: How did you get involved with burlesque and cabaret performances? What are some special tricks you've learned over the years you've incorporated into your show?
DB: I was an international burlesque performer and headliner for nearly 13 years, performing in over 20 countries worldwide. I had an interest in the art form and then I saw an interview on TV with legend Jo King aka Mama JoJo who ran the London Academy of Burlesque. I decided to go to a class and was immediately hooked. I graduated from the academy and was on stage very soon after. I’ve had many incarnations over the years and have learned a number of skills, from designing and making my own costumes and headdresses to choreography: Fan and silk veil fan dance, Isis wings, magic illusions, special effects and some sideshow skills too such as fire performance. It’s been interesting!
Me: As you've become more prominent in the European scene for your dances, what keeps you going and entertaining fans over the years?
DB: I have simply always loved the art and creativity of Burlesque. My own style has always been a little darker, a little more dramatic and theatrical. The themes I’ve explored in my work; Magic, B movies, Old Hollywood Mystery and so on have been a good preparation for my current incarnation as an old-school Horror-Hostess where I get to re-engage with my lifelong passion for Horror Movies and the Mondo macabre!
I have missed the traveling aspect of what I do enormously, these last months under lockdown. I love seeing and exploring new places and meeting new people and I love surprising and mesmerizing an audience. I’m back on the road soon, though which I’m very happy about. 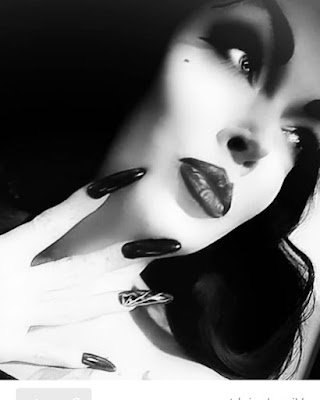 Me: As well, you host the webshow 'Barbeau's Batcave.' Where did the concept for the show originate?
DB: Barbeau’s Batcave – the online show which is a pre-recorded Haunted cabaret with a lot of exciting acts and retro humour- came about as a direct consequence of the pandemic and the frustrations I’ve just mentioned. Suddenly, nobody could perform live any-more and I felt the need to rethink my entire approach. The online Zoom shows that started popping up were very worthwhile but I felt that as a community we could do more. It seemed clear to me that now was the time to try something new and exciting that built on my experience and knowledge.
We’re currently in pre-production for the fourth edition and the response from audiences and from within the community has been terrific. We offer performers the opportunity to take what they do and re-think it for an online audience, using all the editing and other tricks that doing pre-recorded work puts at their disposal. I think we really did help to lead the way as there still aren’t too many shows of this type out there, though I’m seeing more all the time.
I’m very happy with the format – Some creepy burlesque, some music videos, a lot of silly humour and most importantly some of the best performers in the world, showing you what they can do in ways that you’ve never seen before. The idea for the thing came together really quickly, one evening in fact: A slightly tipsy conversation over a bottle or two of red wine. I was delighted.
Me: You also do monthly hosting work for the Chicago Psychotronic Film Society, how did this come about? What special memories or opportunities has this done for your career?
DB: Mike Flores, the head of the Chicago Psychotronic Film Society, got in touch after seeing my work for The Batcave and approached me to work with them as their horror host. This has allowed me to reach a wider audience and to introduce them to true vintage horror cinema, which is a real pleasure. We have recently been putting together “Mondo Movie Massacre”, a series of themed programmes that offer an evening of entertainment showcasing a single chosen actor or director. Our Vincent Price evening included a showing of the William Castle classic “The House on Haunted Hill” as well as short films, TV appearances and trailers. Recently, our Christopher Lee night has followed the same format and developed on it. Viewing figures have more than doubled since we’ve started these programmes. I think part of that might be due to our setting – we’re lucky enough to film the show at “The Electrric Palace” a very small independent cinema with more than a passing association with cult films. I present the show with my sidekick Vinnie, a disembodied brain floating in a tank and the audiences seem to like him as well, though I can’t think why, He’s a bit of a diva.
Me: What upcoming projects or events do you have that you’d like to let our readers know about?
DB: I’m very keen to get back into appearing live onstage and I’m pleased to have been invited to host some live events in the UK this Summer, bringing my spookiness to the stage. We also hope to create a live Barbeau’s Batcave experience, which is very exciting.
Meanwhile, our next Mondo Movie Massacre with the Chicago Psychotronic Film Society will be a Bela Lugosi special and that will arrive online on March 29th. You need to join the Facebook group to get the link.
The next Barbeau’s Batcave goes out between May 7th – 11th and there will be another in August.
I’m also doing another batch of photoshoots soon as well as appearing in another music video which I can’t really discuss yet.
At the same time as all that, I’m developing my Patreon (or Petrifi-on, as I call it) page which will offer discounts, merchandise and exclusive content to my members.
There are also one or two secret projects in the works.
Me: Lastly, being that this is Women in Horror Month, what special message do you have for any women out there looking to join in the industry in any capacity as you are one yourself? Thank you again for your time!
DB: As a lifelong Retro Horror fan, being able to seize the opportunity to engage with what I love has been the best thing I have ever done. If I hadn’t done this, hadn’t had the faith in myself to make the leap, where would I be now? There’s nothing better than being able to do what you love as a job and a year ago I would never have dreamed that I would be doing this. I don’t know if I’m in a position to offer advice, we’re all different and living different lives but finding the courage to make that leap of faith is what worked for me. That’s my message.
To stay up-to-date on her and her work, follow her on social media:
Official Website
Facebook
Barbeau's Batcave Facebook
Instagram
Barbeau's Batcave Instagram
Patreon
This interview ran as part of our Women in Horror Month celebrations. Click the banner below to check out all of our reviews and interviews about the occasion: